Encounter with black triangle UFO in Derbent, Dagestan at 1989.

My encounter with UFO at Caspian Sea in 1989 is described in details. It was silent with flame like lights at corners of the triangle and in its center and it was completely silent. The most rational explanation of the nature of the object I think now is that it was one of the first flying of B-2 stealth bomber that I also saw in Boston at 1998.

It was long time ago, in 1989, I am pretty sure. Really some circumstances are lost from memory now and with time will be completely erased. I can only tell the truth as accurate as I remember it. No more no less.

I was fresh cooked Senior Scientist in Academy Of Science of Soviet Union. My scientific experience included long hours in front high temperature microscope observing growing crystals in silicate melts and measuring the rate growth at different temperatures. I am trained observer.

I was married a while ago and got son of two years old. It was summer vacation time. I and my wife went to Caspian Sea tourist camp near Derbent city in Dagestan Republic of Russia Federation. The camp located on the shore of Caspian Sea about two miles south from the city. The reservation was obtained by my mother in law. To understand more why one wanted to go there you need to know Soviet Union life style. In one word it was cheap. It was an all inclusive bargain with questionable standards of comfort. The place itself was not the best on planet Earth for leisure relaxation. Caspian Sea is open for swimming (I did), beach has sand in some places, sun is hot very much, the camp area had some vegetation. You can check every box in a list as if it was Miami. But it was not Miami. Not even close, if you was in Miami and in Dagestan you must understand what I mean.

We were young and happy to be married. Taking into account that we are still married each other more than thirty years you could image what we felt only at the third year in a family adventure. All deviations from five star service has no effect on our mood these days. Let say that camp was between one and zero star hotel. So what? If open air dance floor that was occasionally occupied with aborigines performing lezginka we just waited out the dangerous inconvenience. And enthusiastically dance ourselves when only fellow tourists left. All at all there were slightly boring objectively but quite happy time for us.

We were there two weeks. The accommodation at first week was in small cabin that was maintained very close to seashore. There are not too much left in memory about that cabin something small but livable. For second week we were moved to sort of hotel room in multistory apartment building that located farther from water line. The room had balcony what is most important in relation for the story. The strange bathtub in room has no water stopper. When I closed it with improvising gag from plastic bag it had happened that there were no tubes to drain away water Nobody cared too much.

An encounter with UFO.

One night at about 10 pm I went to the balcony of our room that was at last, third, floor of the building. Directly affront of the building there were cypress trees slightly higher than the building. The seashore was not directly visible although horizon of the Caspian Sea could probably be seen. The city of Derbent was about two miles north to the left from building direction. There were completely dark around except some electricity lights from windows and economy illumination of the camp territory.

I saw some blue lighting that looked like come from sea to clear, cloudless sky. I want to emphasize the direction: it was form surface up. I did felt strange sensation along whole body. It was not like electrical discharge. It was like sort of light physiological creeping out. Nothing on the level even close to pain. Just instant and less than second strange feeling. And I am very sensitive person. During preparation to kidney X-ray when was injected by contrast barium salt I did feel how it was spreading along my blood steam absolutely clear.

Then after lighting there was period, several seconds, when nothing had happened until the black triangle did appear in sight. It moved absolutely silent in silent windless night. I did cried to my wife to come out and see for herself. She did. Later on when we discussed the event there always was disagreement between us. She is not disputing how I am describing what was seen but she always insisting that it must be just an ordinary plane, not an UFO that is unidentified flying object. She insist that nothing out of ordinary was there.

The object crossed the sky above us for short time that subjectively was about twenty or so seconds. There was no sound at all, nothing like airplane engine. It was quiet before triangle, the same when it was seen, the same after. It projected on me feeling of something very significant, powerful but not treating my safety in any way. I was not scared at all.

The most probable attribution of the UFO track I put on the map is shown below:

There were lights at corners of the triangle and other one in the center. Lights were flame like, without sharp boundaries. Colors were red, blue and white. These colors looks like unusual in sense that was produced not with very hot object like traditional incandescent lamps. Would I see them now I would compare them with plasma, LED or laser show but not exact. And my impression was that lights was not position lights for safety navigating at air there are on every normal plane. I felt that they were sort of part propulsion system moving the object. I cannot recall what light had what color. During the passing of the object my conscious was concentrated not on lights but on impossibility and internal contradictory of the object I looking at.

It was obviously, no doubts, solid triangle. But this conclusion was done on the intuitive level. The object except lights was as black as sky. If you ask me did it eclipse stars I will answer that I don't know. I asked this question myself and cannot answer. It should, I know. It was starry sky I think. My problem with this question is that during observation of the black triangle it was obvious that it is solid object and my mind concentrated on the one question how big it was?

How big it was? The angular dimension of the black triangle was like bid passenger airplane going to the nearby airport. We are living now just under plane corridor and planes often are flying above us. The black triangle was like them. It could be like airbus several hungered meters above ground. Except it moved completely without any sound. To be silent normal jet-plane must be at least several kilometers above. So there were contradiction that completely occupied and blocked my thought process. If it is plane at low altitude why it so quiet? If it is flying very high how big it is, hundred meters? Or it is on the orbit of earth and kilometers of size?

There is no airfields around Derbent. We did arrived by plane to Machachcala city on a way to the tourist camp and then took car for about hundred kilometers ride. I don't recall any other plane sighting at all for whole these two weeks when we were in camp. It was the only flying object I did observed there.

Later on returning to Leningrad (Saint Petersburg now) I did see on TV reports about sighting of  Black Triangle in Belgium. There is article in wikipedia about Belgian UFO wave.

The picture below from wikipedia (external link - no copyright infringement): 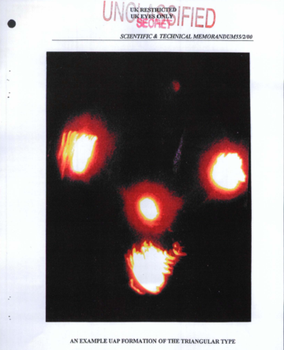 is maybe the best depiction what I did saw. Although the object I did see left impression on me to have smaller lights compare to whole triangle; in at least two times smaller than they are seen on the picture. But in general the picture looks like what it was.

The only other similar observation I had in 1998 when attending Forth of July Independence day celebration in Boston. I together with my family was at Charles River park in crowd cheering Northrop Grumman Stealth B-2 Spirit bomber flying over. It was black triangle above us. There were day light around. The bomber was just black triangle without position lights as I can remember. It was silent compare to cheering crowd. I cannot honestly say that it was the same silent as black triangle I saw in Dagestan in 1989. There were silent night in Dagestan; here in Boston there was big day noisy crowd. But both objects looks familiar for me. If one reading this text will tell me that there were test flight of B-2 Bomber close to Soviet Union border in Caspian Sea I will accept it as the best explanation of the sighting.

Wikipedia article about B-2 Bomber says that first flight of B-2 was July 17, 1989. It is approximately the date of the event I am describing. I cannot recall it more precise than it was summer of 1989. The article B-2 Sighting confirms field propulsion theory is describing event 1998 sighting of B-2 above Boston I mention above. In the article an fantastic claim about silent anti-gravity propulsion system of B-2 bomber is made. I have no idea about it. Maybe, maybe not most possible.

Here is my witness deposition with only purpose to prevent this history to disappear without trace together with my life.